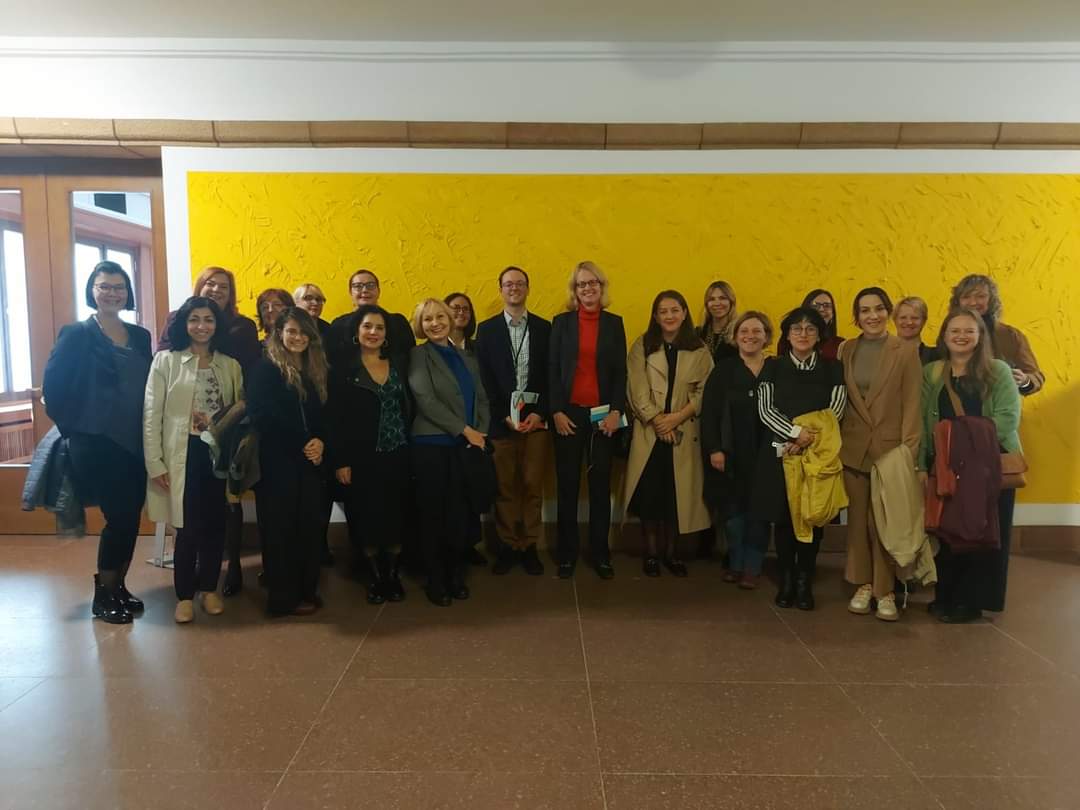 On 19-23 Sep., the Kosovo Women’s Network (KWN) and Kosovar Gender Studies Centre (KGSC) joined a regional coalition of women’s rights organisations (WCSOs), led by the Kvinna till Kvinna Foundation, on an advocacy trip to Berlin, Germany.

During a meeting with the German Ministry of Foreign Affairs, KWN Program Director and Lead Researcher Nicole Farnsworth thanked Germany for its support of visa liberalisation and its engagement in finding a lasting, peaceful solution for Kosovo. She requested that the German government, special envoys and the German Ambassador consult WCSOs more regularly in accordance with the German government’s new Feminist Foreign Policy and UN Security Council Resolution (UNSCR) 1325 on Women, Peace and Security, towards ensuring that peace proposals and political dialogues incorporate a gender perspective. She also emphasised the importance of the German-endorsed EU Special Envoy for the Serbia-Kosovo Dialogue Miroslav Lajcak consulting with women’s rights groups, as women have been consistently left out of negotiations and dialogue processes, counter to the requirements of UNSCR 1325.

On behalf of KWN, including KGSC, she also emphasised the importance of the German government funding and monitoring the repatriation of women and men from Germany to Kosovo, particularly Roma, Ashkali, and Egyptians, as reintegration programs have not always considered the diverse needs of repatriated women, men, girls and boys. Insufficient attention to gender during this process can worsen existing vulnerabilities and even contribute to human rights abuses and discrimination without careful, well-funded programs.

Maja Raicevic from the Women’s Rights Centre in Montenegro spoke about the fact that women and particularly WCSOs have been largely left out of the Berlin process and that gender equality conclusions prepared have been diluted or removed. She requested that the German government involve WCSOs and support their recommendations through this political dialogue, incorporating attention to gender equality in the three agenda themes of energy, the green agenda, and the economy to be discussed this fall.

The coalition also met with the Germany Ministry for Economic Cooperation, which is developing a new feminist policy on development cooperation in line with Germany’s Feminist Foreign Policy. Farnsworth shared key findings and recommendations from the regional study Where’s the Money for Women’s Rights?, based on a surveyed of 241 diverse WCSOs and 71 funders across the Western Balkans (WB) on funding trends from 2014 to 2019.

Based on this study and on behalf of the coalition of WCSOs, she recommended that:

1) the German government and EU set clear financing targets to deliver on their gender equality commitments in the EU Gender Action Plan III and Women, Peace and Security Agenda;

2) review Germany’s and specifically GIZ’s contracting modalities to facilitate long-term contracting of WCSOs as partners in change; and

3) ensure engagement of WCSOs in program planning and implementation, recognising and compensating WCSOs for their expertise. She also shared the recommendations from a policy brief a coalition of 145 WCSOs signed on Resourcing Feminist Movements on the Occasion of the Generation Equality Forum.

Activists requested that OSF ensure attention to furthering gender equality is integrated in its work and observed that women’s rights groups are experts and allies for this. Regarding OSF’s support of the Open Balkan Initiative, activists observed that no known gender analysis exists for this economic initiative on exchange of goods across borders and how it may impact women and men differently.

Given that some countries like Kosovo are small, it could have detrimental effects, particularly on the most marginalised, and these effects must be assessed before pushing the initiative ahead further. The initiative also requires greater transparency in media to avoid fake news and better inform people about the initiative, activists said.

The coalition also met members of the German Parliament Committee on European Union, representatives of the Swedish Embassy in Germany and Heinrich Boll Stiftung. Other activists from Albania, Bosnia and Herzegovina, North Macedonia and Serbia also shared about the situations in their countries and the region during these meetings.

This included concerns over shrinking space for WCSOs, attacks on women human rights defenders, and needs for better integrating a gender perspective in the EU accession process, among other themes.