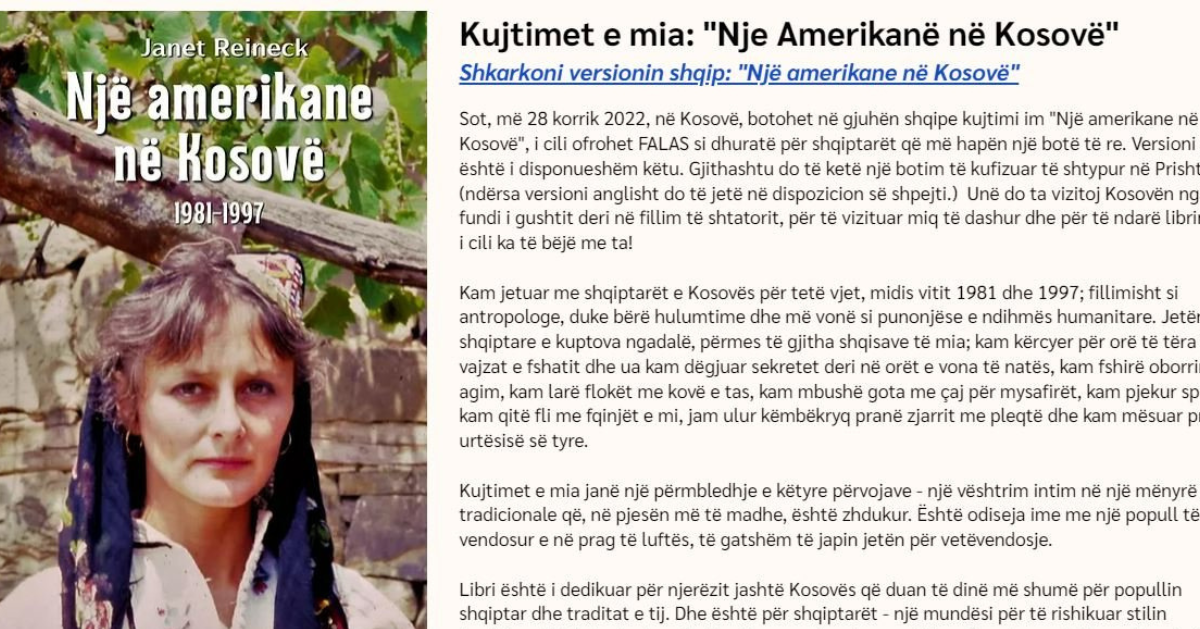 On 1 September 2022, the American anthropologist Janet Reineck published her book “An American Woman in Kosovo” at the National Library in Pristina – a book she dedicated to Albanians for, as she said, “opened a new world for her.”

Reineck lived with the Kosovo Albanians for eight years, between 1981 and 1997: first as an anthropologist doing research and later as a humanitarian aid worker.

“My understanding of Albanian life came slowly, through all my senses—dancing with village girls and sharing their secrets late into the night, sweeping the courtyard at dawn, washing my hair with a cup and bucket, pouring tea for visitors, roasting peppers and eating fli with my neighbors, and sitting crossed-legged by the fire with the old men, receiving their wisdom,” she wrote in her website dedicated to the Albanian families in Kosovo who welcomed her into their homes in the last century.

We interviewed Reineck, who lives now in Los Angeles, USA. She said that the book is intended for people outside of Kosovo who want to know more about the Albanian people and their traditions. And it is for Albanians — a chance to revisit the traditional lifestyle and learn about remote regions they may have never visited.

Reineck visited Kosovo after 20 years this week and this is how she describes her impressions. “The standards of living have been increased, and its extraordinary what Kosovars have done for 20 years. It is the combination of euphoria that came after the war. (We saw then a) mythic return.”

She believes Kosovo has a lot to offer to its people. According to her the women’s position has been improved, too. In this regard, she said that the women’s rights organizations contributed most.

Reineck speaks about the period when she started her work as an activist for women’s rights at the same time as the current executive director of the Kosovo Women’s Network, Igballe Rogova, back in the ‘80s.

“I grow up with Igo during 80 and 90’ties. When she started work in Has I have started to work in Vitina at the very same time. I want to say that you have in Igo an extraordinary leader in every possible way and at the same time she has trained so many women to be leaders.”

Asked why after so many years she has decided to write a book about Albanians, she said.

“I belong to Kosovo, I really do. My heart is really in Kosovo. As soon as I walked through the gates of the yard in the villages that I have visited this year, I just started crying. And I never cry. I cannot cry for one year. But, I just went crying everywhere I have been. I couldn’t help it.

It is crazy. I don’t understand but Kosovo it is my spiritual home. I am fortunate to spend eight years there. I feel as close to them as to my own family, even closer. “