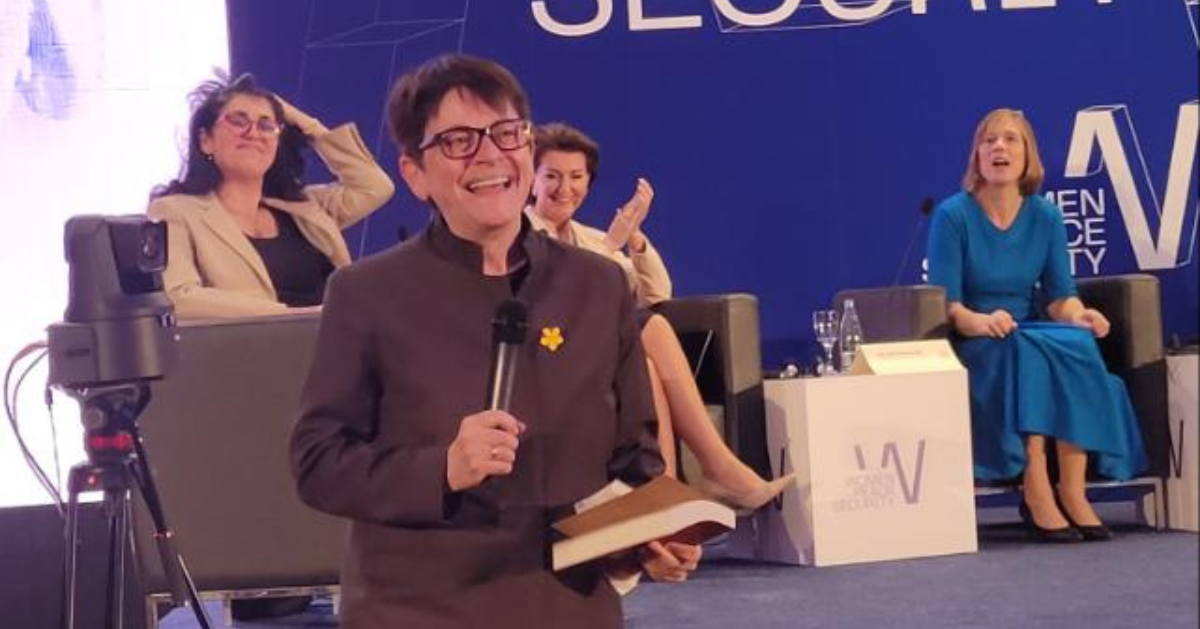 This weekend, the President of the Republic of Kosovo, H.E. Dr. Vjosa Osmani Sadriu and her team gathered more than 500 leaders from Kosovo and the world at the Women, Peace and Security Forum in Pristina.

Among the distinguished personalities speaking the first day, Kosovar women’s rights civil society activist Igballe Rogova from the Kosovo Women’s Network (KWN) spoke on a high-level panel: “22 years after 1325: what have we (not) achieved?”

“We activists do not give speeches; we tell stories,” she began…

She proceeded to share the history of women’s leadership and peace activism in Kosovo during the 1990s. “We did not carry guns, but we brought bread,” she explained, recalling the infamous Bread March that sought to peacefully break Serbia’s siege of Drenica. This was one among several massive peaceful protests that women organised, in an effort to bring international attention to Serbian oppression under the Milosevic regime and to call for peace.

When the United Nations Mission in Kosovo (UNMIK) came to administer Kosovo after the war, she said that activists were excited and hopeful that UNMIK would bring with it protections for human rights, as well as the recently adopted UN Security Council Resolution 1325 on Women, Peace and Security, which would ensure women’s participation in Kosovo’s state-building and peace processes.

“I wish we did not get so excited,” Rogova said. Rather than ensuring women’s inclusion, UNMIK ignored women leaders. “But we immediately used Resolution 1325 to be heard!”

Even when UN Security Council delegations visited Kosovo (“with 12 men and one woman”), their agendas never initially included consultations with any women from politics or civil society, Rogova recalled. “We used the Resolution to push for them to include us on the agenda,” she said. Even then, they only met women leaders late at night, and requested to talk about “violence against women” and “women’s issues”. In response, women’s rights activists cited Resolution 1325, demanding that they had the right to speak about political issues as well. Shockingly, the delegation said that they already spoke to (male) political party leaders about political issues. Women activists cited Resolution 1325, demanding their right to speak about politics.

Rogova also shared stories of peacebuilding among women in Kosovo and Serbia. In 2006, Women in Black Network activists from Serbia apologised for “crimes committed in their names” by the Serbian government. This was the first publicly apology ever made to Kosovar Albanians, and it was captured on media, RTV21, deeply touching thousands. “For two hours nobody could speak, we were only crying,” Rogova recalled. “We needed that time and space to heal.”

Afterwards, together they formed the Women’s Peace Coalition, writing joint letters parallel to the Ahtisaari-led negotiations between Kosovo and Serbia, where women once again had been excluded; together they made Kosovar and Serbian women’s voices heard.

Kosovo women’s rights activists have extensive knowledge and experience utilising Resolution 1325 and furthering its implementation. In sharing our experiences, we hope to share lessons learned, best practices, and strategies that other women’s rights activists, political leaders, and development actors can use in furthering the Resolution’s implementation in conflict and post-conflict areas elsewhere.

For more stories, read our new book, the second edition of 1325 Facts & Fables: A Collection of Stories about the implementation of United Nations Security Council Resolution 1325 on Women, Peace and Security in Kosovo from 2000 to 2020. #WPSRKS2022